In About One work Emily Kocken reflects on one work or phenomenon in art, literature, nature, religion, etc.

A first glance at Lovelyn could trick one into mistaking its exterior material (the skin of the sculpture) for something soft, like wool. It was my first association and I’m sure the trick is intended, a lovely pun to make by the artist, inviting me to caress this often human-sized sculptures, feel the solace of their shape.

I met this work online, the desire is a digital one, transforming me into an avatar of my own artful longing.

Since soft sculpture was claimed to be invented by pop artist Claes Oldenburg in the late sixties, it stayed hard for women to get credit for their labor. Yes, I am not just talking about art work by female artists, but also about the work that was done by so-called house wives, rattling their pots and pans in the kitchen louder and louder, hoping to be heard, recognized, freed from daily burden.

I love confusion, and mixed messages carried out through art. In this case of meeting Lovelyn letting myself being lured in by the aura of soft woll, the soothening promise, feminine assocation of the material, one could say some kind of self-inflicted solace, being tempted if only in thought by the thought of unravelling the threads of these faux lane exteriors covering the voluptuous female figures, dressed up as giant ice cones, mocking pop art in a sensuous and playful way.

In these confusing covidian days old misogynistic sentiments have re-arisen, and it is a good thing that art is there to question the spirit of the ordinary, that has been hidden in the comfort of being before the pandemic era.

And no, Eidelberghards figurine (size 230 cm x 75 x 75 cm) Lovelyn is not made of wool but highly pigmented silicon (polyorganosiloxan), Eilegerhards primary material, she also often uses porcelain (not here), elevating the strength of the fragile, carrying references to the opulance of the baroque, and playing with the fluid meaning apparatus of the luxurious.

This little text is written out of surprise, when I stumbled upon an image of this sculpture that managed to embody a myriad of other artful spirits, a sign of an art work being ‘good’ or at least interesting, a work that celebrates the referential being energetic, a work evoking the energy (heritage) of others, without feeling threatened by it, nor wanting to treaten anyone else, playing a fair game of honest homage to ancestors and fellow artists without saying this word (homage) out loud thank the godess for that.

I just referred to Claes, and pop art, and the shift that was made in the sculptural art world in the late sixties in the public gaze, when pop art brought or gave birth to extremely large daily objects into the public space.

The shape of Lovelyn reverberates Louise Bourgeoisan vibes, the shapes of the sculpture body is unmistakably female, but also whimsically reminding us of the ball shaped frou frou thingies some first class decorated poodle dogs carry around their ancles just to show off the uselessness of their fur.

I felt touched by the soft quality I assumed the woolly exterior to possess, I felt alarmed yet excited by the color red, not just a red bright and fresh, but the shameless color of a ripe tomato.

Eilergershards work is on show at Anna Laudel Gallery in Istanbul from September 24 – December 27, 2020 https://annalaudel.gallery/exhibitions/anke-eilergerhard-resilience-september-24-december-27-2020-istanbul/ 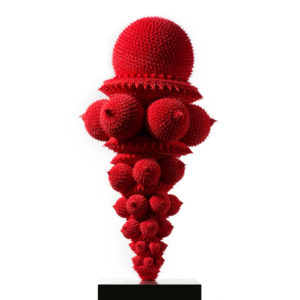