What I love about the project classroom of British photographer Julia Fullerton–Batton is how she streetcasted her models, then dressed them up the same. Not exactly finding lookalikes, but expressing anxiety and tender fear by cloning a type of girl. Since there are so many beautiful images, I would like to send you all of on a digital fieldtrip to her website (juliafullerton-batten.com).
One wonders how the notion of similarity can be expressed in a more profound and eerie way than this. Girls from the same mother, automata from the same manufactor. Her work touches on many levels that are relevant in a lot of work of contemporary female artists.

In my performative project ReadInCinema I am operating from a different angle but embracing the same electric field: where girls, women, men try not to step out of line, both arms wide, nose in the wind, being who they are, unexpectingly finding others looking for something else, maybe, but tramping around in the same field.

More photograhers have been or still are interested in ‘alikeness’ or defined in a wider sens, in the layered identity of the feminine. American photographer Diane Arbus took this famous picture, Identical Twins (Roselle, New Jersey, 1967) known to all. 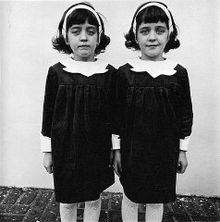 There is difference of course between finding twins, or in my case finding a person with the same features and working together closely under a lot of time pressure creates a different biorhythm than being born in the same womb, eating the same food, breathing the same ‘air’. Twins, triplets etcetera is a mystifying concept, charged with paradox. Impossible to be (part of) one when you’re not. Taling about twinsisters… L.A. Raeven pushed the concept of being two halfs one, by eating the same food to a whole new level.

Me and my lookalikes try to eat the same food during rehearsals, food I bring to the table, as a mother to her children in a way.